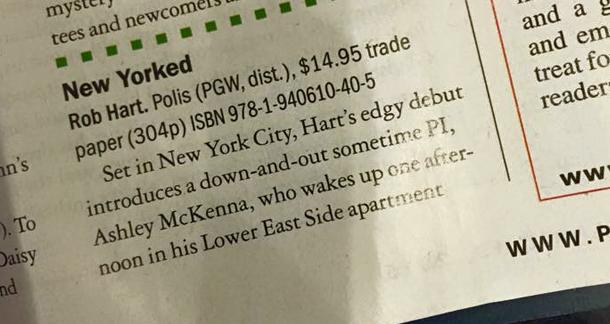 My latest Path to Publication column is live at LitReactor, in which I talk hunting blurbs and getting reviews. Can you dig it?

Cheers to S.W. Lauden, who put the screws to me over at his website, Bad Citizen Corporation. He had some great questions—I hope I gave some good answers back.

Got two new blog posts up on the interwebs. They are very different from each other.

Here’s a piece about why I think The Strain is a dumb television show and how I think it could be better, for LitReactor:

Here’s a piece about having a little girl and being a feminist and wanting to be a better man, for Nailed:

One is sarcastic and one is not. Both feature generous use of the word ‘fuck.’ Some things never change. Enjoy.

On Oct. 20 I’m kicking off another round of my marketing class, Sell Yourself, over at LitReactor. It’s a class I love to teach, even though I feel a little uneasy trying to convince people to sign up.

Here’s why: A lot of people are making their bones these days by ripping off writers, trying to teach them the ins and outs of marketing yourself and your writing. Problem is, a lot of what they teach is bullshit.

They might offer the stray nugget of wisdom, but for the most part, it’s padding—services and techniques that are unproven or don’t work, but mentioning them buys a half a day of discussion time. And then it’s easier to justify a multi-week course with an inflated price tag.

That’s why this class is just one week long, with only four units—social media, bios and websites, press and blog outreach, and miscellaneous (newsletters, author photo, online advertising, author promotional services, etc.). I think this stuff is important to cover, but I don’t want to waste anyone’s time either.

Seriously, no one needs LinkedIn. No one needs Pay with a Tweet. No one needs Klout. Fuck Klout. The time you waste with Klout could be better spent writing, or doing literally anything else.

But there are plenty of nuts-and-bolts about this that pass people by. For example, here’s one I’ve been noticing a lot lately.

Twitter. You can respond to people and tag people, right? Here’s an article I wrote for Mulholland Books. They posted a link on Twitter, and I’m tagged in there. Cool! People will read it, and maybe I’ll even get a few extra followers out of it.

So what do you do with 25 Jim Thompson paperbacks, anyway? @robwhart has some ideas: http://t.co/cRAAyNv2yi

Now, here’s a tweet that went up to promote an interview I did at LitReactor with our new erotica instructor, Rachel Kramer Bussel.

One problem: Because my Twitter handle is at the start of the tweet, Twitter considers it a direct conversation. So only people who follow me AND LitReactor will see it. That’s not good—it limits the audience!

It’s not terribly elegant, but it’s an easy workaround for this—now all of your followers will see the tweet, instead of just a limited batch.

It’s stuff like this—little things that slip through the cracks—that are important to cover. There are a lot of mistakes that are prevalent in online marketing, for self-published and traditional authors alike. And that’s okay! A lot of this stuff is self-taught because there aren’t a lot of other options.

It’s also easy to make mistakes. A lot of people don’t understand the difference between social marketing and spam. Pro-tip: Blasting your Amazon link to strangers on Twitter is the wrong way to go about it.

Between MysteriousPress.com, LitReactor, and my own work—plus former careers in journalism and PR—I feel pretty good about teaching people this stuff. And I have fun doing it, too! Just yesterday I broke out my social media lecture for review, and already I’m finding I have to update stuff. These things move at the speed of light.

All of this is to say that there are a lot of unscrupulous people out there who will try to convince you that you need to spend nearly a grand on an eight-week Twitter course, and those people are assholes. As with all things in life, you should always be a little wary of people who want to take your money.

Be wary of me too!

If you’re interested in learning about the class, check out the sales page, or ping me through the site, or on Twitter or Facebook. We can chat a bit and I can tell you about what we’ll be reviewing.

Class starts soon. It’s going to be fun. And I promise—no bullshit. I’ll teach you the nuts and bolts, I’ll answer your questions, I’ll be honest if I don’t know something, and I’ll give you the tools you need to shore up your marketing.

Over at LitReactor, I’ve got a new installment in my Path to Publication series. This time I talk about TV rights, sequels, synopses, and show off the pretty new cover for New Yorked.

And over at the Mulholland Books blog, I’ve got a piece that explores a very important question: What do you do with a giant pile of Jim Thompson books?

Only one of the options I discovered involves body disposal.

Go forth and read stuff!

Negotiations are complete. Contract is signed and in the mail. Nobody died. I’d call that a win.

Column is up at LitReactor. Read it here.

My Path to Publication column is back at LitReactor!

Come find out how much it sucks to lose a book deal and how nice it is to be back in business.

My latest Path to Publication column is live at LitReactor.

It went live last week, actually, but I’ve been on vacation. Check it out!

My first novel is the start of a series. In my last column, I talked a bit about the process of researching the sequel, City of Rose. You’d think, in the month since that column ran, I would have gotten a lot of work done. And you would be wrong!

If I were a smart person, I would have used my impending purchase of an XBox One as an incentive to work harder. I should have said: “Self, you can buy the XBox One only when you finish the first draft of your next book. Then you can play a straight week of Titanfall as a palate cleanser, before you have to get into the editing process.”

But I have poor impulse control. So I bought it. And really, it’s the definition of a catch-22: I wanted to use my advance to treat myself to something, and in the process turfed my chances of having the free time to write another book. And you know what? I’m fine with that. Titanfall, man. There is something so viscerally satisfying about being pinned down by enemy fire and then summoning a giant robot from the sky and then climbing inside it to fire rockets at people. Especially after a long day…

Over at LitReactor, I reviewed Tom Spanbauer’s latest novel, I Loved You More, and looked back at his first four novels, and talk about how much his writing has meant to me. You should check it out. It’s the only earnest thing I’ve ever written.