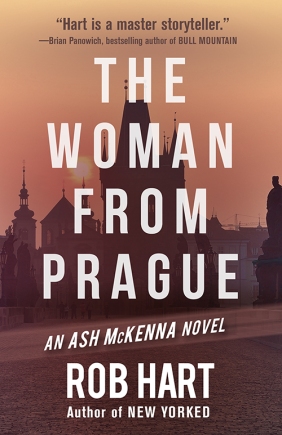 Amateur private investigator Ash McKenna’s time is about to expire―on his visa, that is. Having fled the demons that haunted him in the U.S., Ash has been laying low in Prague for nearly three months. Now, it’s time to move on. But as he contemplates his next stop, a man named Roman appears, claiming to work for the U.S. government, and possessing intimate knowledge of Ash’s many sins. Sins nobody should know. Roman offers to protect him… in exchange for a favor.

It sounds simple: a bank employee named Samantha Sobolik is set to receive a package containing covert information in a handoff on the Charles Bridge. Ash must intercept the package, and deliver the contents to Roman. Ash refuses―until Roman threatens to kill his mother. Out of options and too far away to protect her, Ash agrees.

But when Ash gets to the bridge, he discovers that the handoff is actually a hit. Ash ends up battling a mysterious and deadly assassin in a fight he barely survives. As it turns out, the job is far more complicated and dangerous than anyone thought. Ash finds himself in a strange city, outmatched, hunted, and trapped in a dangerous game where nobody is what they seem―including Samantha. The Woman From Prague is a riveting novel of international suspense from one of the very best crime writers working today.

“The Woman from Prague keeps you hooked with its fast-paced story set in the treacheries and terrors of our post-9/11 world.” —James Grady, author of Six Days of the Condor

“Here’s a spy thriller in all the genre’s old-school glory.” —Booklist

“A book exciting enough to be your ‘summer beach read,’ but subversive enough to make you think about all the ways in which Hart is rewriting the rules of the modern spy novel.” —Independent Publisher Magazine

“A winning espionage novel in a series that keeps getting better.” —Literary Hub

“A resounding smash as both a fast-paced summer read, as well as the slow and steady growth of one of the most well-rounded on-going characters on the shelf.” —Crimespree Magazine