Nominated for an Anthony Award for Best First Novel

Named a favorite read of 2015 by Crimespree Magazine

Ashley McKenna is a blunt instrument. Find someone, scare someone, carry something; point him at the job, he gets it done. He generally accepts money upon completion, though a bottle of whiskey works, too—he’s comfortable working on a barter system. It’s not the career he dreamed about (archeologist) but it keeps him comfortable in his ever-changing East Village neighborhood.

That’s until Chell, the woman he loves, leaves him a voicemail looking for help—a voicemail he gets two hours after her body is found. Ash hunts for her killer with the grace of a wrecking ball, running afoul of a drag queen crime lord and stumbling into a hard-boiled role playing game that might be connected to a hipster turf war. Along the way, he’s forced to face the memories of his tumultuous relationship with Chell, his unresolved anger over his father’s death… and the consequences of his own violent tendencies.

“The New York of New Yorked is a place of heartbreak and murder that I highly recommend you visit.” —Josh Bazell, author of Beat the Reaper

“With a deft eye for the dirt under its polished fingernails, Rob Hart finds the rotten core inside today’s Big Apple.” —Todd Robinson, author of The Hard Bounce and editor of Thuglit

“…the literary version of The Warriors.” —Lyndsay Faye, author of The Gods of Gotham

“… New York is a verb, and the chase is on. You won’t be able to turn the pages fast enough.” —Suzy Vitello, author of The Moment Before and The Empress Chronicles

“… Like a sucker punch to the guts before you turn the first page.” —Matthew McBride, author of Frank Sinatra in a Blender and A Swollen Red Sun

“There are good action scenes, nice offbeat characters, but what lingers is the swoony dialogue… Noir with a tingle of doomed but sweet romance.” —Booklist

“A masterful debut… this is a book that sticks with you.” —Crimespree Magazine

As an amateur PI with a bent moral compass, Ash McKenna is good at finding people—but not at staying out of trouble. Between his own violent tendencies, the shadow cast by his father’s death, and a self-destructive revenge quest, he made a mess of his life in NYC. Figuring it was time for a change of scenery Ash relocated to Portland, taking a job as a bouncer in a vegan strip club. And he hasn’t had to hit anyone in six months.

So when one of the club’s dancers asks Ash for help finding her daughter, he declines, content to keep the darkness in his past. But soon Ash is held at gunpoint by a man in a chicken mask, and told to keep away from the girls. Unfortunately Ash isn’t good at following directions either.

As Ash navigates an unfamiliar city, he finds himself embroiled in a labyrinthine plot involving a ruthless drug cartel and a scandal that could reach one of the most powerful men in Portland. Ash is dead set on finding the missing girl, but realizes that in order to deliver her safely he may have to cross the one line he promised himself he never would.

“City of Rose has my favorite kind of hero, a tough guy romantic with a smart mouth and a dark past. Terrifically written, and populated with rich characters, this book had me by the throat from page one.” —Chelsea Cain, NYT bestselling author of One Kick

“Hart is a master storyteller who can make a city just as vital as any flesh and blood character.” —Brian Panowich, author of Bull Mountain

“An engaging read… Rough without being sadistic, gritty without being sordid. Ash’s reluctance to use violence to deal with his adversaries resolves itself in a way that doesn’t duck the moral quandary of pacifism, though the vengeance he finally takes isn’t presented as triumphant, either.” —Kirkus

“City of Rose shows wonderful growth and change… Adding in layers of dry humor and using Ash’s internal monologue to not only be sarcastic, but to give Ash added dimension, is exactly what readers were hoping for.” —Crimespree Magazine

“Rob Hart can write. He has mastered the lean and direct hardboiled style, kind of halfway between John D. MacDonald and Richard Stark.” —Dead End Follies

“City of Rose is playful, snappy, and fun—especially compared to New Yorked, which holds to a more somber, ghost-haunted tone throughout. The Portland setting allows Hart to play into his knacks for dialogue and comedic scene setting… [This] book is genre writing par excellence.” —Entropy Magazine

Ash McKenna used to be an amateur P.I.—emphasis on ‘amateur’. Despite good intentions, he made a mess of his life in New York, so tried to build a new one in Portland. But after a traumatic turn of events, he ends up on a commune in the Georgia woods, binge-drinking cheap whiskey and waiting for his passport to flee the country and nightmares that have followed him.

Then a man is found dead. Known only as ‘Crusty Pete’, the commune dweller is sprawled in the dirt, having fallen from a high rope bridge. It’s written off as an accident, but Ash suspects something more sinister. As he looks into Pete’s death, Ash is shocked to find the supposedly peaceful community houses a rogue faction preparing to commit an unspeakable act of violence.

Ash has to make a choice: run, or put his skills to use and try to stop them. But he doesn’t know who to trust, or where the faction is planning to strike. As he struggles to put a stop to the violence, while keeping his own demons at bay, Ash finds that it’s only a matter of time before one or the other puts him down for good.

“In Hart’s lively third outing for occasional PI Ash McKenna… the story zigs and zags and then heads off in yet another direction, keeping one step ahead of the reader until it ends up in an unexpected but satisfying spot.” —Publishers Weekly

“Hart delivers a suspenseful, gritty third book in the Ash McKenna series that admirers of the Southern grit lit tradition of Daniel Woodrell will enjoy. Readers of David Joy’s Where All Light Tends To Go will appreciate the rural setting in this novel, which can be read as a stand-alone.” —Library Journal

“What could easily be predictable turns into a complex story where the line between the good guys and the bad guys is blurry, where the tough people are full of compassion and the seemingly innocent are willing to threaten or worse to get what they want.” —Criminal Element

“Watching Ash’s wounded sense of self begin to heal is one of the most satisfying things I’ve read all year.” —Crimespree Magazine

Amateur private investigator Ash McKenna’s time is about to expire―on his visa, that is. Having fled the demons that haunted him in the U.S., Ash has been laying low in Prague for nearly three months. Now, it’s time to move on. But as he contemplates his next stop, a man named Roman appears, claiming to work for the U.S. government, and possessing intimate knowledge of Ash’s many sins. Sins nobody should know. Roman offers to protect him… in exchange for a favor.

It sounds simple: a bank employee named Samantha Sobolik is set to receive a package containing covert information in a handoff on the Charles Bridge. Ash must intercept the package, and deliver the contents to Roman. Ash refuses―until Roman threatens to kill his mother. Out of options and too far away to protect her, Ash agrees.

But when Ash gets to the bridge, he discovers that the handoff is actually a hit. Ash ends up battling a mysterious and deadly assassin in a fight he barely survives. As it turns out, the job is far more complicated and dangerous than anyone thought. Ash finds himself in a strange city, outmatched, hunted, and trapped in a dangerous game where nobody is what they seem―including Samantha. The Woman From Prague is a riveting novel of international suspense from one of the very best crime writers working today.

“The Woman from Prague keeps you hooked with its fast-paced story set in the treacheries and terrors of our post-9/11 world.” —James Grady, author of Six Days of the Condor

“Here’s a spy thriller in all the genre’s old-school glory.” —Booklist

“A book exciting enough to be your ‘summer beach read,’ but subversive enough to make you think about all the ways in which Hart is rewriting the rules of the modern spy novel.” —Independent Publisher Magazine

“A winning espionage novel in a series that keeps getting better.” —Literary Hub

“A resounding smash as both a fast-paced summer read, as well as the slow and steady growth of one of the most well-rounded on-going characters on the shelf.” —Crimespree Magazine 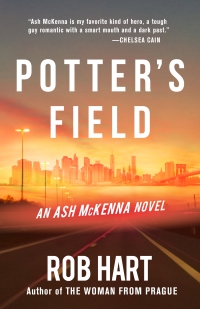 Amateur private investigator Ash McKenna is home. After more than a year on the road he’s ready to face the demons he ran away from in New York City. And he’s decided what he wants to do with his life: Become a private investigator, for real. Licensed and everything. No more working as a thug for hire. But within moments of stepping off the plane, Ginny Tonic, the drag queen crime lord who once employed him—and then tried to have him killed—asks to see him.

One of her newest drag queen soldiers has gone missing, and Ginny suspects she’s been ensnared by the burgeoning heroin scene on Staten Island. Ginny wants Ash to find her. Because he’s the best, and because he knows Staten Island, his home borough. Ash is hesitant—but Ginny’s offer of $10,000 is enough to get him on his feet. And the thought of a lost kid and a bereft family is too much for him to bear.

He accepts, and quickly learns there’s something much bigger at play. Some very dangerous people are vying for control of the heroin trade on Staten Island, which is recording the highest rate of overdose deaths in the city. As Ash navigates deadly terrain, he find his most dangerous adversary might be his own past. Because those demons he ran away from have been waiting for him to come back.

“Hart has a fine command of wiseguy comments, a modern take on the noir crime idiom, and enough vulnerability in his protagonist to make the reader sorry to see the last of Ash.” —Publishers Weekly

“This is an unusual and quite affecting crime novel… and we agree with a fellow PI who describes our hero as ‘a good kid trying to do the right thing’.” —Booklist

“While it’s sad to see Ash McKenna go, Rob Hart sends him off with a bang… Potter’s Field is a gripping thriller that wraps up one of the genre’s most underrated series.” —The Real Book Spy

“Ash has a wicked wit and a brutal com­passion.” —Star Tribune

“(A) fast-paced, adventure-packed read… Hart knows his Staten Island setting well and makes strong use of it.” —Library Journal

“Hart’s newest is a distinctly New York crime novel and doesn’t flinch at taking on one of the city’s most pressing issues of the day: the spread of opioids and the rise in overdose deaths.” —CrimeReads